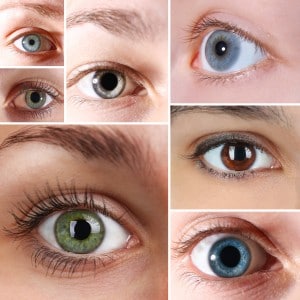 Eye color is determined by two main factors which include pigmentation and genetics. In addition to these factors, many other less influential factors also play a role in eye color as well including Rayleigh scattering, collagen and Mie scattering, The iris or the colored part of the eye often starts out quite blue for most fair skinned babies while babies with darker skin generally have darker eyes at birth. As we grow our bodies produce melanin in different amounts affecting the color of the eye to change.  More melanin means brown eyes, a moderate amount of melanin produces green or hazel eyes and blue and gray eyes have very little melanin.

Every person has roughly the same number of pigment producing cells called melanocytes. Despite this, eye color varies greatly as the amount of pigmentation produced by these cells is dependent on genetics. This pigment which makes eye color is the same pigment which produces skin color. The more pigment produced, the darker the color. This is why as a general rule, fair skinned  people have light or blue eyes while darker skinned people generally have darker and often brown eyes.

To date, 15 distinct genes have been found to impact eye color. As the color of the eye is so strongly impacted by genetics, certain populations tend towards specific eye colors. For example, in Germany, 75% of the population has blue eyes. In the U.S., the number of children who have blue eyes is decreasing as further populations continue to add to the genetics of the population from countries around the world.

While the biggest eye color changes occur within the first three years of life, eye color can change as a person gets older though usually only in moderation. While moderate changes are usually normal during the aging process, the pigments of the iris can breakdown causing lightening of the eye.  Uneven or significant changes in eye color can be a sign of something less normal and should be evaluated by an ophthalmologist.

If you live in Northern Michigan and are looking for an ophthalmologist Grayling MI, contact Alpine Eye Care today at 1.877.SEE.2020. We specialize in regular checkups as well as issues relating to diseases, injuries and procedures. Take care of your eyes and let us help you.