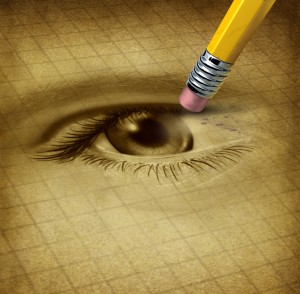 November is Diabetic Eye Disease Awareness Month and helps to generate awareness among patients and community. Take a closer look at some of the conditions that may impact those who are dealing with the symptoms of diabetes today and become aware.

Diabetes is the leading cause of blindness in Americans aged 20 to 65. There are approximately 29 million Americans age 20 and older who have diabetes but nearly one-third don’t know they have the disease. People with diabetes can develop diabetic retinopathy, a degenerative disease of the retina that can lead to blindness. Symptoms often go unnoticed and don’t begin to affect a person’s vision until the disease has progressed, making the condition harder to treat. The longer someone has diabetes, the more likely they will develop diabetic retinopathy. One common symptom is often blurred vision over several days.

Diabetic retinopathy is a potentially blinding condition in which blood vessels inside the retina become damaged by high blood sugar levels caused by diabetes. This results in fluid leaking into the retina, obstructing blood flow, which can lead to severe vision loss. High blood pressure and smoking can also aggravate diabetic retinopathy.

People with diabetes are 25-30 times more likely to lose their sight from retinopathy, cataracts or glaucoma, than the general population. About 700,000 Americans have retinal disease and each year, 25,000 people go blind from diabetic retinopathy. People with diabetes also tend to get cataracts at a younger age and have it progress faster. Symptoms of cataracts include clouding of the lens and blocked light. Diabetes patients are 40% more likely to suffer from glaucoma than those without. Glaucoma occurs when pressure builds in the eye, pinching the blood vessels that carry blood to the retina and optic nerve. Vision is gradually lost as the retina and nerve become damaged. There are many treatments for glaucoma, which is generally symptomless, including drugs to reduce pressure in the eye, others involve surgery.

As part of November’s Diabetic Eye Disease Awareness Month, eye doctors across the country are urging Americans with diabetes to get a dilated exam. Pregnant women with diabetes should have an eye exam in their first trimester, because diabetic eye disease progresses more rapidly during pregnancy. Early diagnosis of diabetes can reduce a person’s risk of developing eye disease. Only with a dilated, comprehensive eye examination, can doctors look inside your eye and examine blood vessels directly, detecting signs and symptoms of vascular disease caused by diabetes. With a thorough eye exam, early signs of diabetic retinopathy, such as leaking or damage blood vessels, retina swelling, and deposits on the retina can be detected. Diabetic Eye Disease Awareness is a perfect time for you to invest in your vision by scheduling a comprehensive eye exam.

Remember, you only have one set of eyes, protect the gift of sight. The only way to know what’s really going on with your eyes is to see an eye care professional. Schedule your appointment today!
Call Alpine Eye Care today: 1.877.SEE.2020.